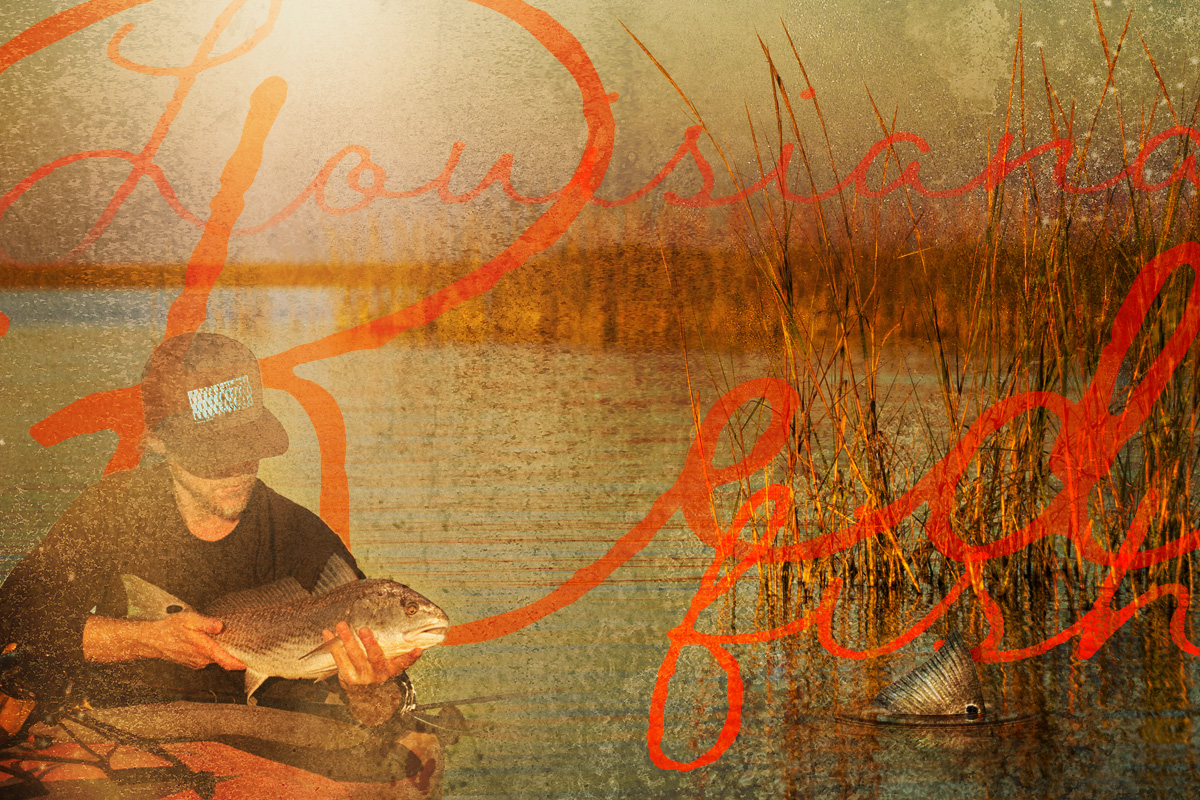 Chasing Louisiana Redfish on the Fly.

Kayak Fly Fishing Louisiana Redfish. Why do we travel to new destinations to fly fish? Is it about triumphantly hoisting an exotic, new fish species, carving another notch in the fly fishing bedpost? Is it about scratching that “exploration” itch that builds up while sitting in an office for 40 hours per week? Is it about the tertiary stuff… like exciting food and interesting local flavor that lures us away from our home waters? Maybe it’s a little bit of each. Whatever it may be, while planning this fishing trip we had grandiose visions of stalking and sight casting to big, spotted, red tails in pristine Louisiana marshes. It turns out there was a little bit of sight casting, a lot of blind casting, a lot of weather watching and copious amounts of beer drinking (shout out to Dixie). The journey never quite plays out how you planned, for better or for worse. That was certainly the case on our most recent Chasing Scale pre-holiday fly fishing adventure.

I arrived in New Orleans just after dark. Ryan was antsy. He jumped the gun and arrived a few days early. His dog Izzy was riding shotgun as he pulled up curbside to New Orleans’ busy airport. Izzy greeted me with frantic anticipation and big, sloppy kisses. To her delight my stress-induced, swampy pits were ripe for her sniffing. First stop: food! Local-style, cajun cuisine and cheap beer were on our minds. Not far out of the city we found ourselves away from the bright lights and the myriad of truck stops and IHOPs. Zydeco’s Cajun Restaurant beckoned us with warm light and bustling activity. We walked in and were instantly enveloped by southern charm, funky accents, spicy food and weird local beer. With cajun shrimp, redfish and jambalaya churning in our bellies we continued on toward our rustic, rental abode on Grand Isle—our gateway to a vast network of shallow Louisiana marshes.

Our first day on the water started before dawn. Here’s what we knew: the day’s weather looked to be perfect—light breezes out of the south and warm air and water temperatures. Low tide would be around 7:30am, high tide around 5:30pm. From Grand Isle’s north shore we slipped into the watery darkness at 6am. The put-in was a flood-lit, well-maintained launch dedicated to non-motorized vessels. Soon the lights grew dim as we paddled our kayaks into the bayou marshes that speckled the bay. It was nearly silent with no air or water movement to speak of. Then we started to notice the wildlife. We weren’t the only animals chasing scale. As the sky gradually transitioned from deep plum to magenta a pod of bottlenose dolphins broke the mirrored surface in hot pursuit of schooling mullet. Pelicans were perched on channel markers; their keen, determined eyes focused on the tranquil water. We quietly entered a marsh lagoon as a couple ospreys joined the party. They methodically patrolled the skies, occasionally diving to ambush fish. Is wasn’t long after that when we sighted our first spotted tail slowly swishing around in the shallows. The sun was peeking above the horizon as the redfish began to actively feed along the fringes of the reeds and grasses. Game on! 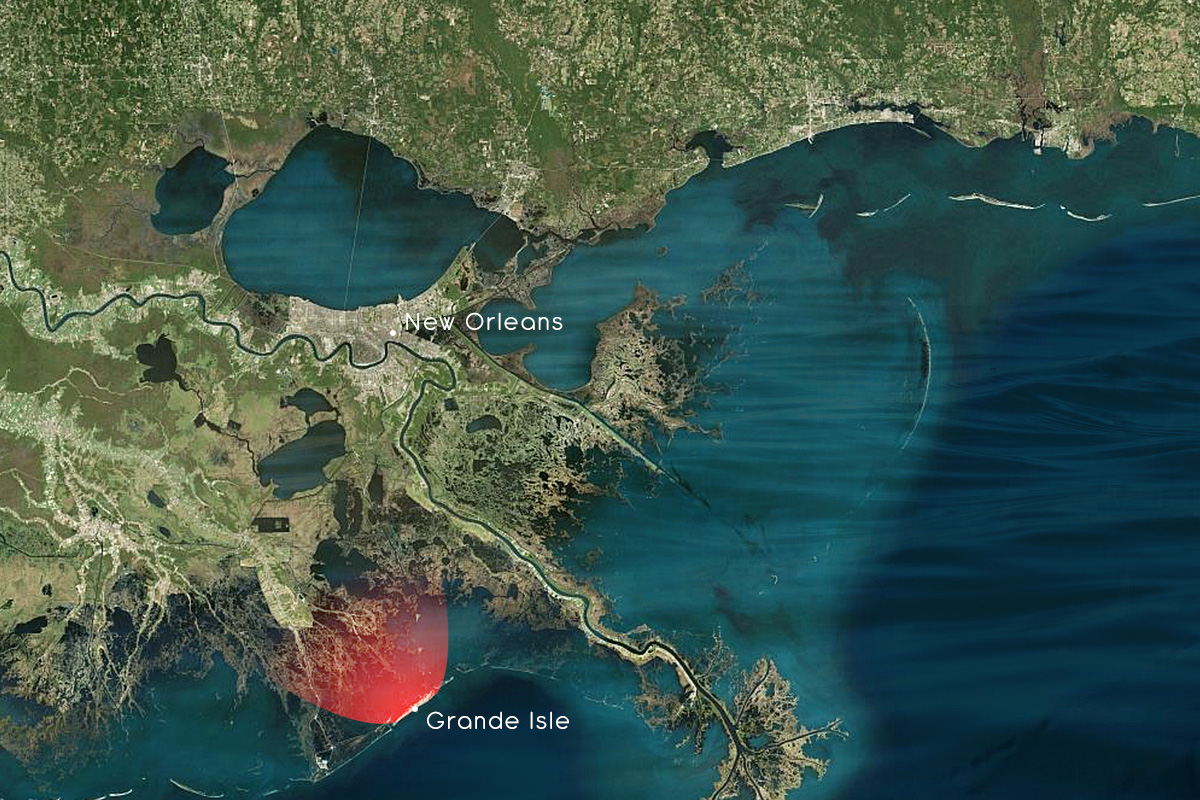 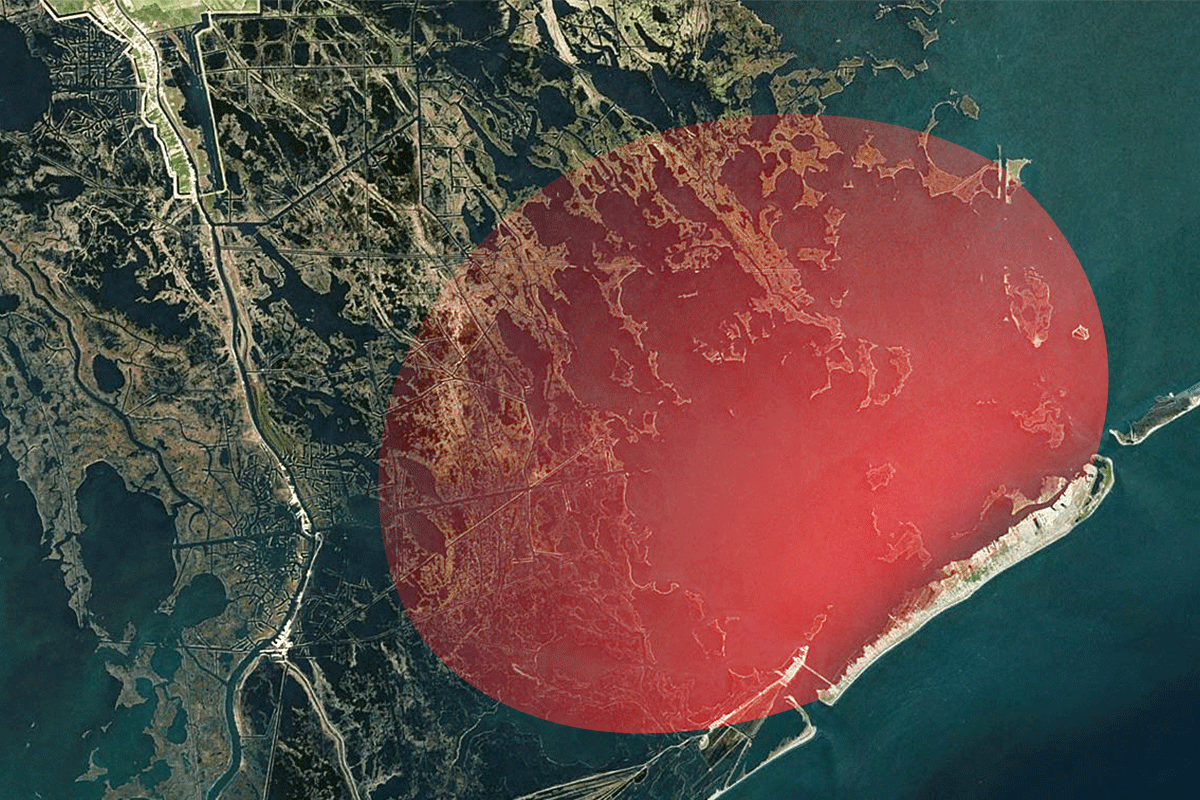 In one ear, out the other.

Ryan had logged a couple days on these oyster-laden flats kayak fly fishing Louisiana redfish before I arrived. He landed a few fish: redfish, speckled trout and sheepshead. He relayed some potentially useful information to me. He mentioned the spots where the reds seemed to be the most active. He also said that they fought differently than bonefish. Unfortunately I was only halfway listening at this point, as usual. He followed up by saying that during his first hook up the redfish reacted as if it wasn’t hooked at all, leaving slack in the line. Only when it got closer to his kayak did it fight like hell… or something like that… I don’t know, I wasn’t  really listening. 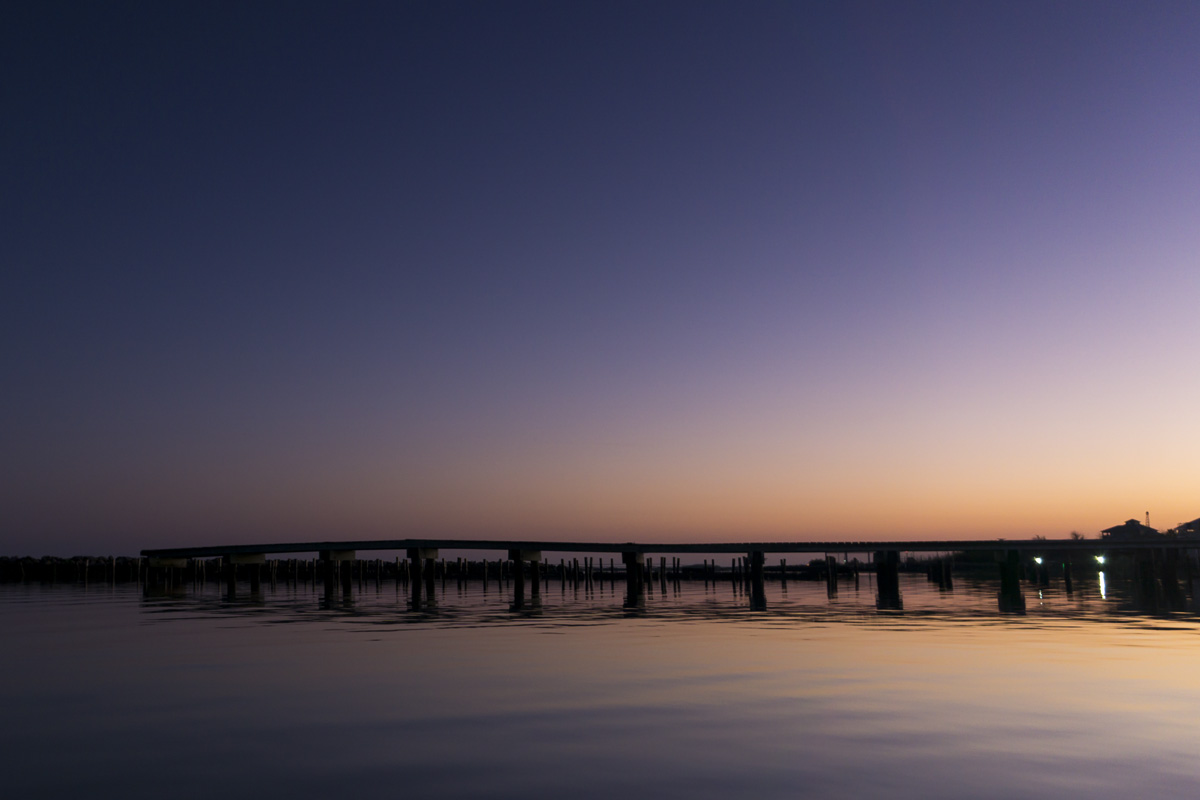 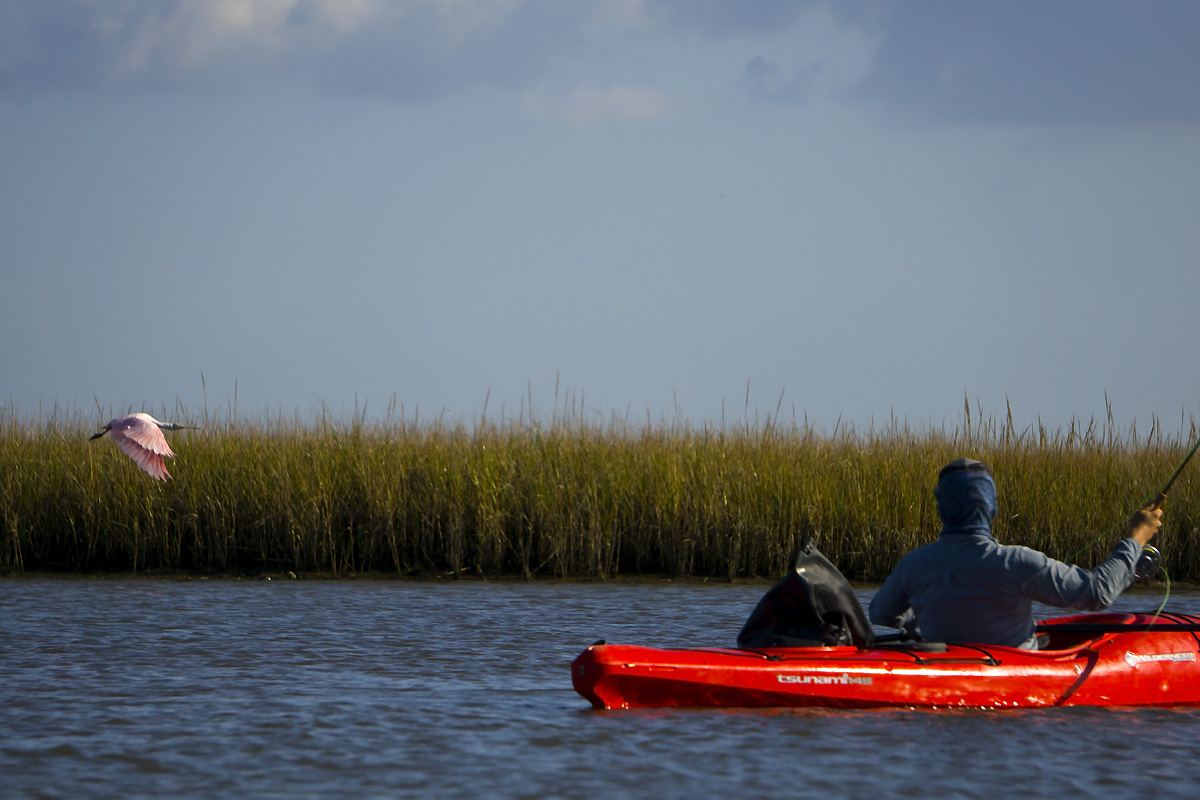 I spotted a tailing red in maybe six inches of water along the shoreline. Its red back soon appeared and I knew it was a fairly large fish. It only took a couple casts to entice it to my tan-colored shrimp pattern. A couple twitches on the fly and the hook was set. Then, it wasn’t. I couldn’t really tell. The fish didn’t appear to be fighting. I saw my opportunity to take up the slack in the line. That was my mistake. As I took up slack the fish gave a few quick jerks and it was off. I should’ve listened a little more closely to my compadre. 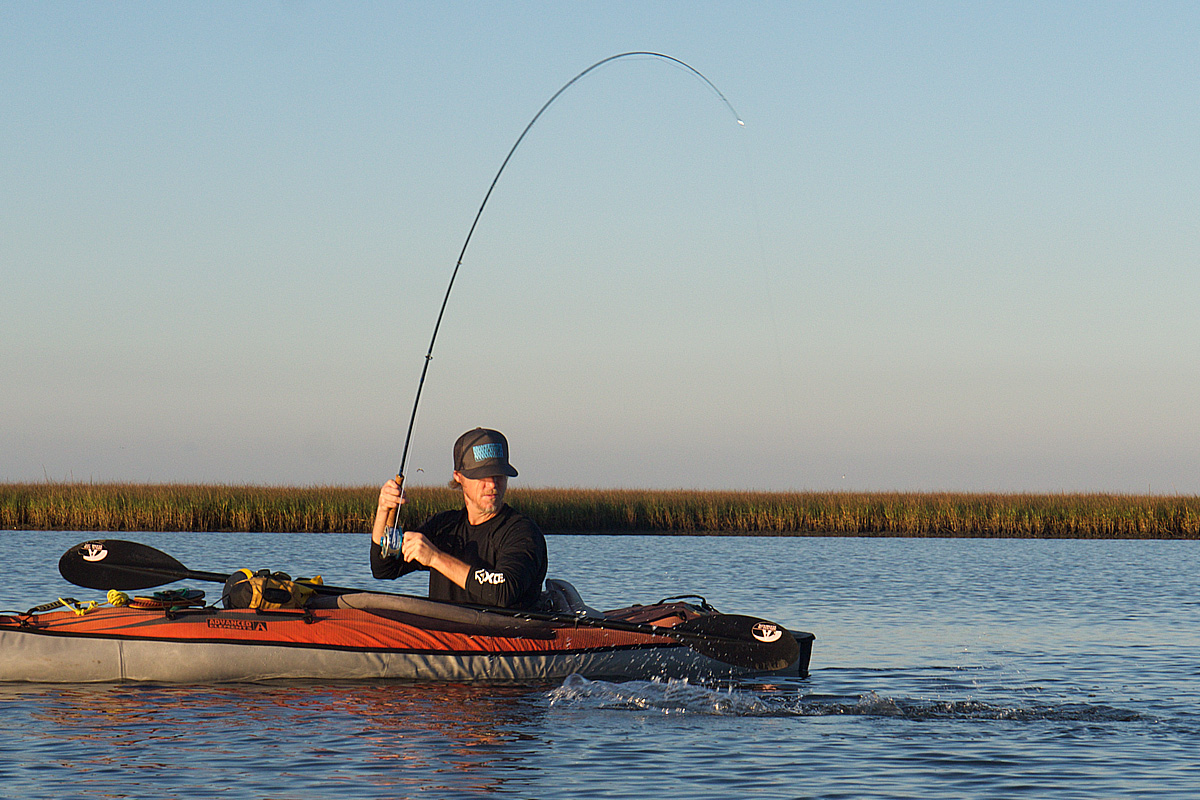 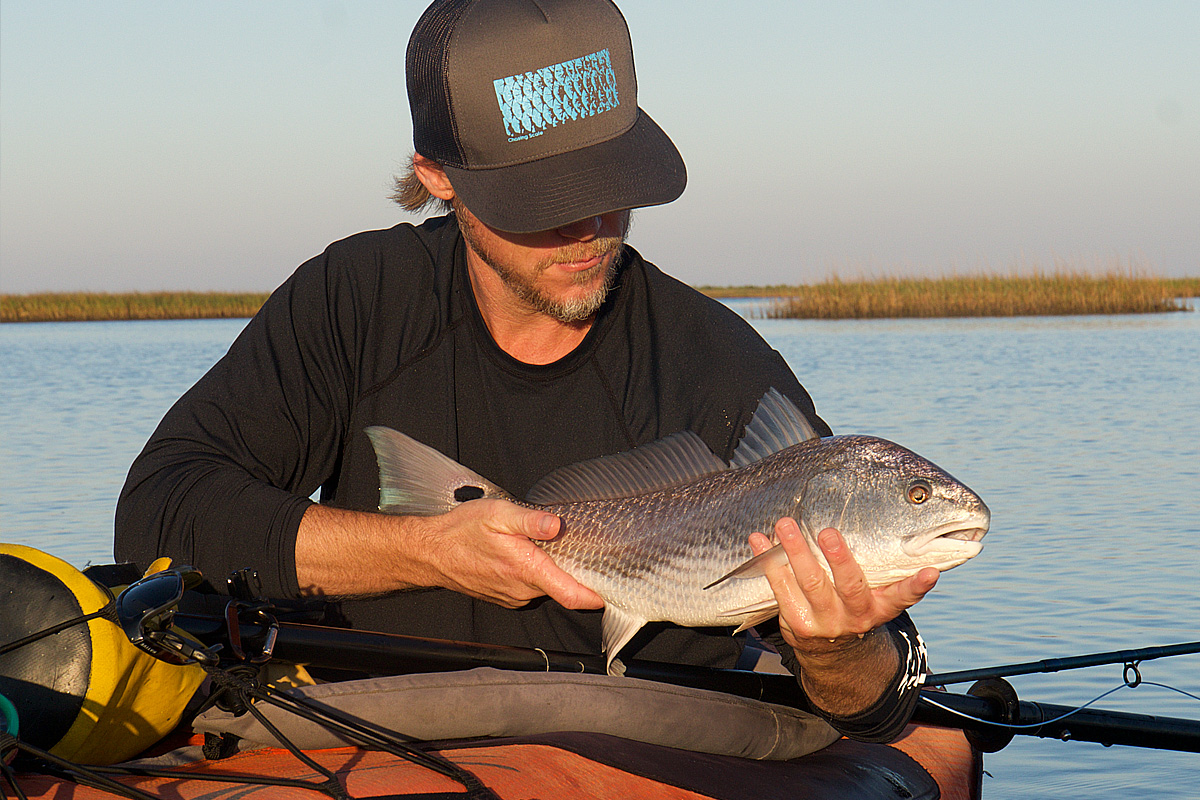 Not 10 minutes later I had another red on… and this time I made no mistakes. In no time I was humbly raising a gorgeous redfish alongside my inflatable Advanced Elements kayak. The marsh ecosystems seemed to provide quite a bit of food and protection for these redfish. And, they were larger than I had anticipated. They weren’t the big bulls that are known to enter the bay in large schools, but they were on their way. After a few more catches and releases the activity died down and the tide was on the rise. It was after 9am. The rest of the day produced only a few speckled trout. 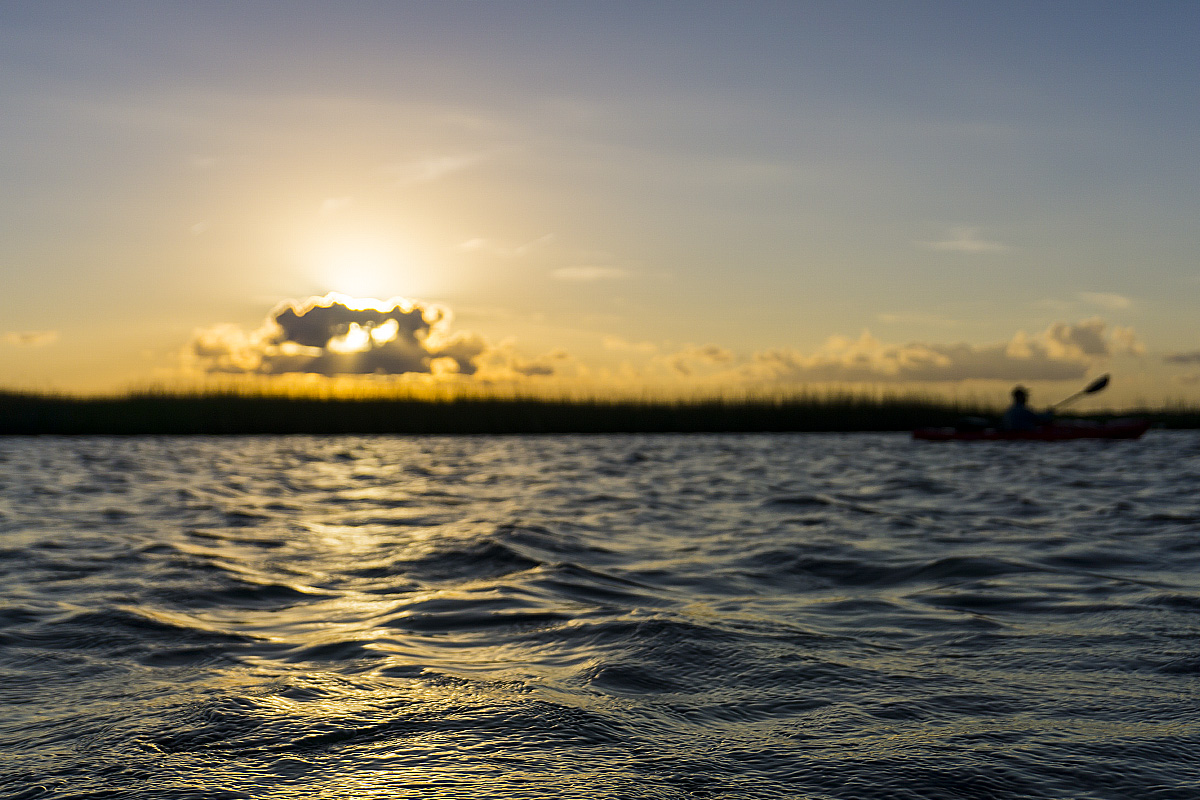 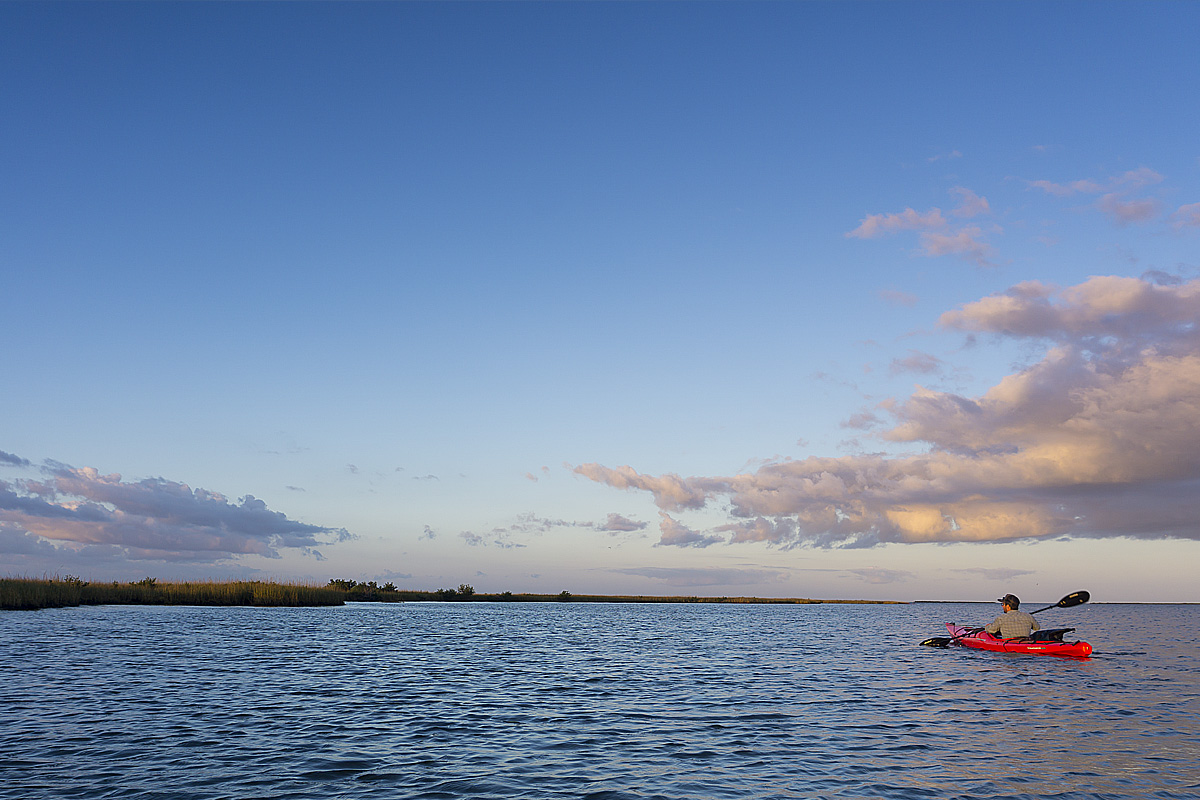 Day two produced zero redfish. We saw a few but they didn’t appear to be feeding. Change was in the air. The winds were picking up and air temps were cooling.

Day three brought cold temps and brutal winds. The high was around 60 degrees and the winds were 20+ knots out of the NE. Kayak Fly Fishing Louisiana Redfish in the bay was futile. We found more protected waters along the highway just west of the main bridge connecting the mainland to Grand Isle. We didn’t see a single redfish. Instead of feeding in the shallows, the reds seemed to be changing behavior in response to the weather changes. They were seeking deeper water. On a brighter note, it was the weekend and we did find lots of locals with spinner rods, bobbers and stinky bait. Ryan was pissed that I left the rotten shrimp in the fridge!

Day four brought more howling wind and cold temps. Our limited time on the water produced only false excitement as the only activity was the occasional breaching mullet. But the Dixie and Natty Light flowed like wine and the day faded away into carbonated stupor. Our time for kayak fly fishing Louisiana redfish was over, at least for this fly fishing adventure.

What lead to the early success with redfish site-casting?

Here are few links to resources for the Louisiana marshes: