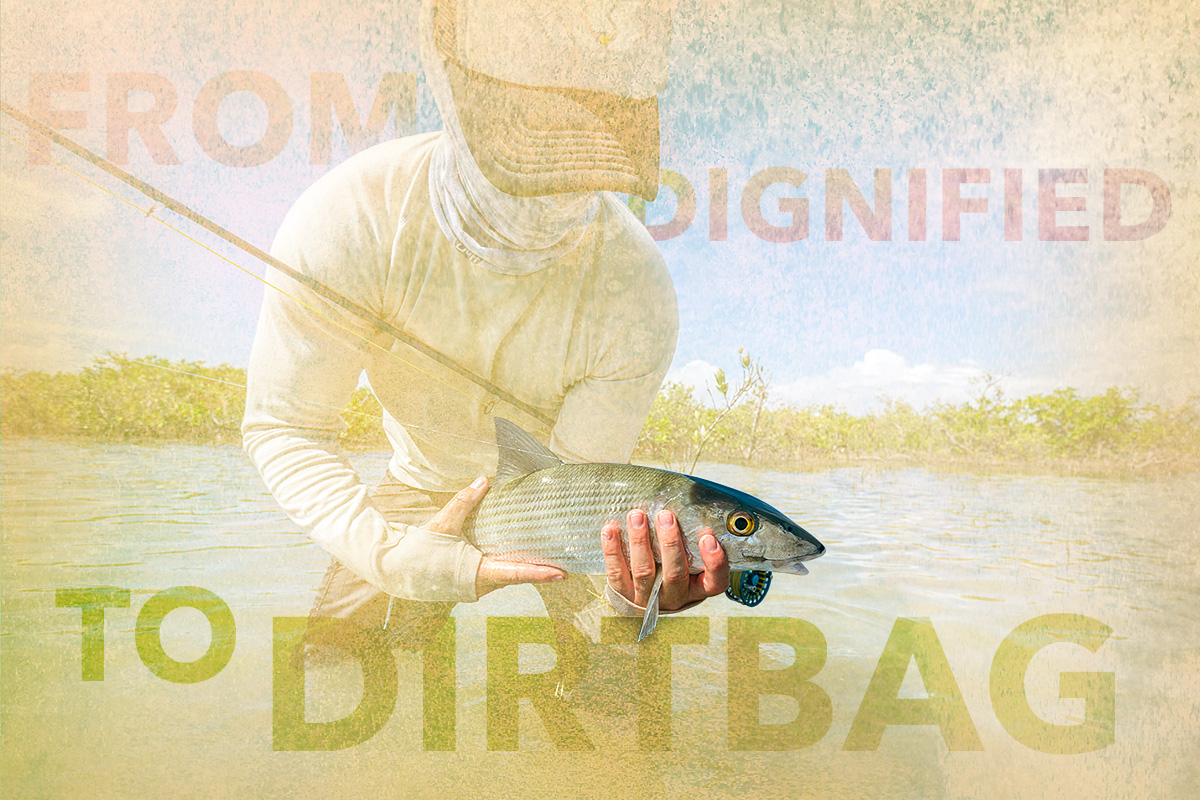 Cozumel Mexico bonefish kayak fly fishing travel adventures are always memorable. Cozumel is a MUST-DO on your list of fly fishing adventure destinations! We’ve returned to the island on multiple occasions for fly fishing exploration and chances at big, tailing bonefish and cruising baby tarpon. Cozumel is simply that good! And, these days it’s a home away from home for us. This essay documents a moment in time… an event from a one of our epic trips. It’s not a moment we’re particularly proud of but it’s one that has burned itself into our memories forever.

Note: To the non-fishing reader: a quality and respectable bonefish experience on the flats involves quietly and methodically stalking the fish, casting with grace and precision to an unsuspecting target and ultimately engaging your catch with care and efficiency.

Don’t be shocked. I’m about to tell you a fishing story that is actually true. 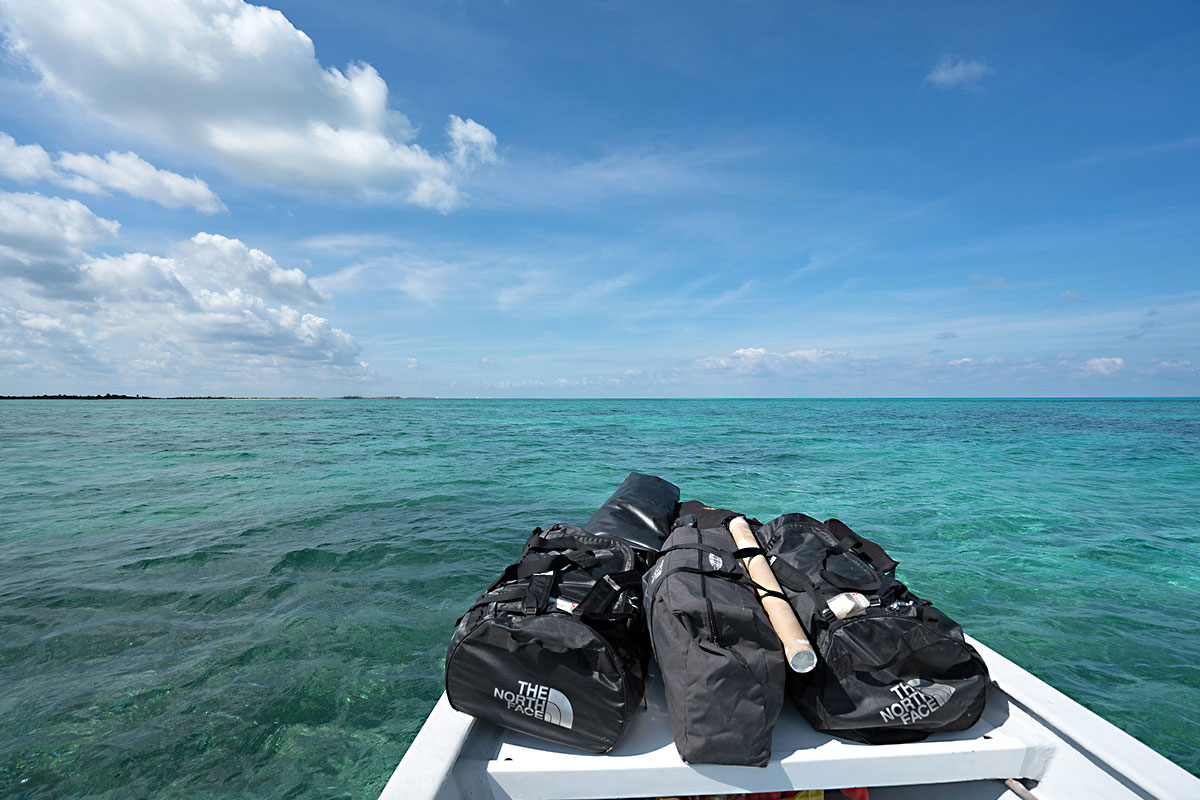 The lagoons were very calm. It was mid-day and the three of us had kayaked deep into a labyrinth of Mexican mangroves choked with knotted branches partially submerged in knee-deep, salty bath water. The skies were clear. The sun blazed. The wind was slight. Muy tranquilo. Conversation was what you might expect from three buddies after a couple days in the wilderness. You might say there was a smidgen of verbal jabbing. “Deluge” might be the better word for it. Let’s just say that thick skin is a crucial characteristic on a trip like this. We all have it. When you’re not catching fish the ribbing tends to fill the void. And, there was definitely a void. To this point the bonefish we had encountered seemed to know our every move before we did. They were challenging to catch as it was. Add variables such as clear skies, wind and a glare to the equation and what was slightly possible became impossible.

This was a return trip to the island of Cozumel located just off the western coastline of the Yucatan Peninsula. It was only a year ago when Ryan and I took a gamble on this tourist destination better known for scuba diving. The fishing potential was the question mark. It was a blind cast that ultimately paid off. After that first visit we vowed to return. A year and half later we were back in the bliss.

We weren’t alone out there. Living within the thick mangrove vegetation and tranquil shallows are part-time and full-time residents. For the wildlife enthusiast it’s a candy-filled piñata. Wading birds with exaggerated characteristics quietly perch around every corner. With lanky legs, elongated necks, bizarre beaks, broad wings… these migratory birds are perfectly adapted for this wetland environment. Herons, pelicans, flamingos, storks, ibises, cranes, egrets, spoonbills, and cormorants are commonly seen. Crocodiles, some more than 15 feet long, also call this place home. We were obviously there for the bounty of fish: baby tarpon, permit, jacks, trigger fish, snook and snapper, just to name a few. Bonefish make up the majority. In the right conditions and at the right time a cornucopia of bonefish tails, the holy grail if you will, can be seen in abundance on the flats. 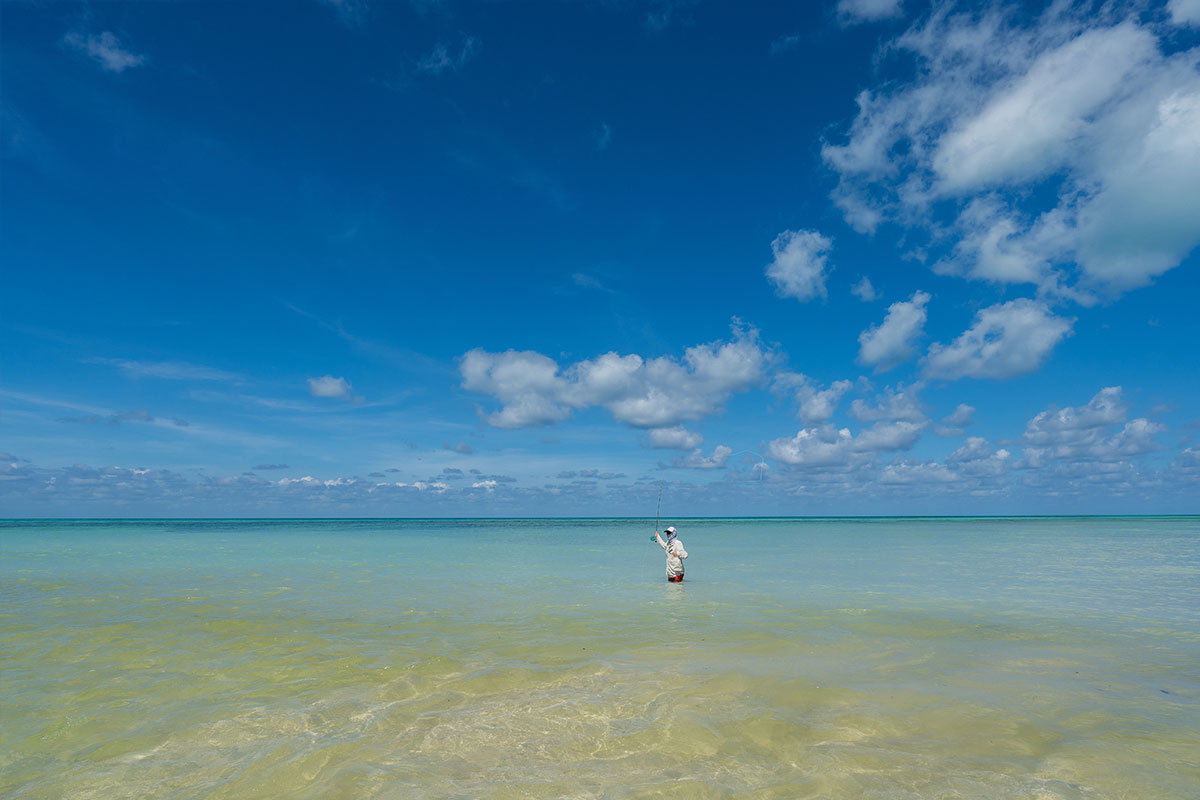 We found ourselves way back… as far from the open ocean as the lagoons would allow us. It was a dead end. All life seemed to stand still. The silence was intense as we scanned the water. Like a needle ripped off a turn table, the harmony was interrupted by surface activity from foraging bonefish, or “macabi”. There were a couple groups, each with maybe 5-6 fish. And, they weren’t shy. They moved purposefully. They seemed to cover the area in patterns, stopping periodically to aggressively nose through the sandy substrate for worms or crustaceans. 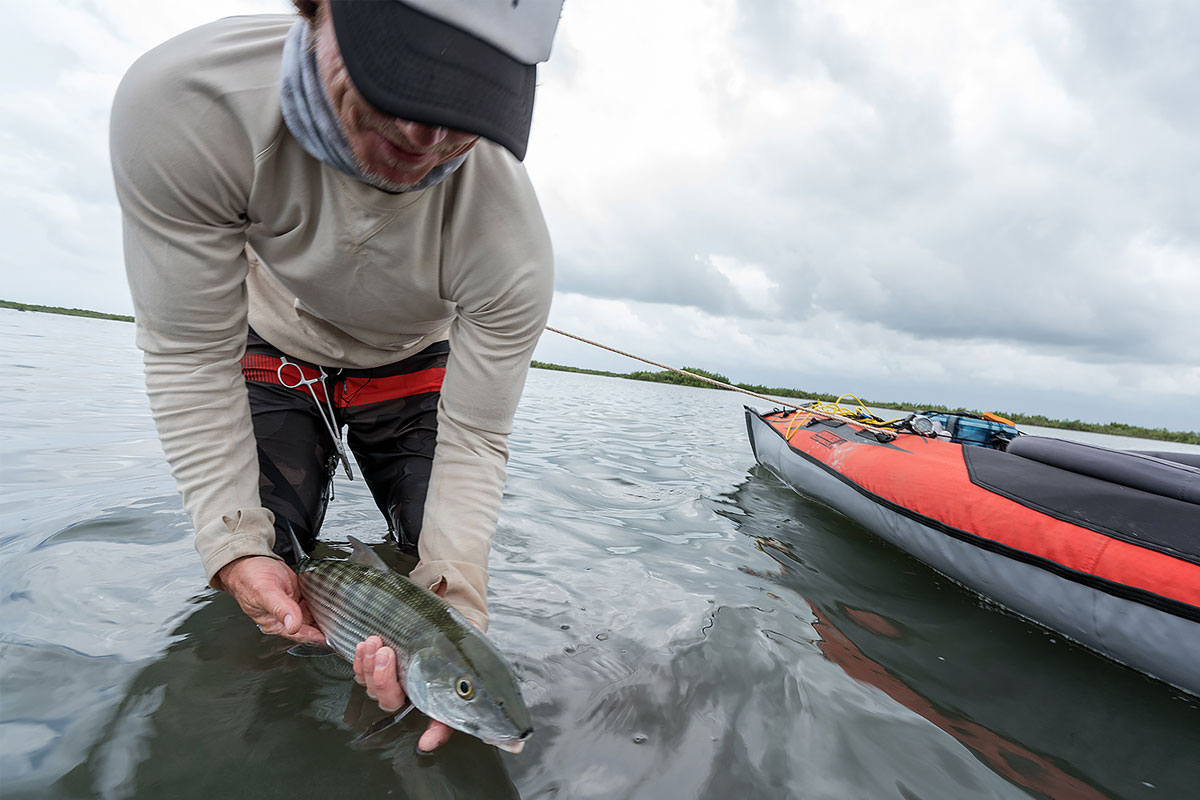 Fish in a barrel, or so we thought.

Our excitement was through the roof. But, how quickly excitement can turn to frustration. We each tried our luck trying to entice them with our flies. Our casts were accurate enough. Flies landed near downturned noses. Flies landed into their paths of travel. After about 20 minutes it was obvious they were disinterested in anything we presented. One too many errant casts and the fish were spooked from the pool like teenagers from a busted party. We broke out the Nutella, tortillas and tequila.

“There is certainly something in fishing that tends to produce a gentleness of spirit, a pure serenity of mind.” – Washington Irvin

Gentleness. Pure serenity. Not here. Not in this little tidbit. Yes, we are fly fishermen. What happened next momentarily turned the three of us into “dirtbag” fly fishermen. Ryan was mid-dip in chocolaty goodness when the marauding fish returned. And, they brought friends. They were 12 to 15 fish strong and pushing a lot of water. We all stared as the school moved right toward us. We were in disbelief. The three of us were nothing if not opportunistic… fumbling for our fly rods and casting spastic presentations at the group now a mere 20 feet away. Rick got his fly hung up on some baby mangrove shoots. He screamed expletives at his errant cast knowing his chances to get another cast out dwindled. I crossed my leader and fly right over the top of Ryan’s. Both of our flies settled right next to the noses of the fish. Ryan hadn’t caught a fish up to this point on the trip yet. He muttered “come on, damn it! Take it!” Then my line went taught and my reel screamed. The rest of the school immediately scattered. The sleigh ride was on. I heard Ryan say “Don’t loose him!”. I clumsily shuffled through the shallow water in pursuit of my prize. I knew the routine: let the fish wear itself out. And, do everything you can to avoid getting your line wrapped around obstacles… especially sharp ones! My eyes never wavered. It slowed its progress in the next pool down which was about the size of a basketball court. I reeled in as much line as I could before the fish took off again. Minutes later the fight was over. To the dirtbag goes the prize! 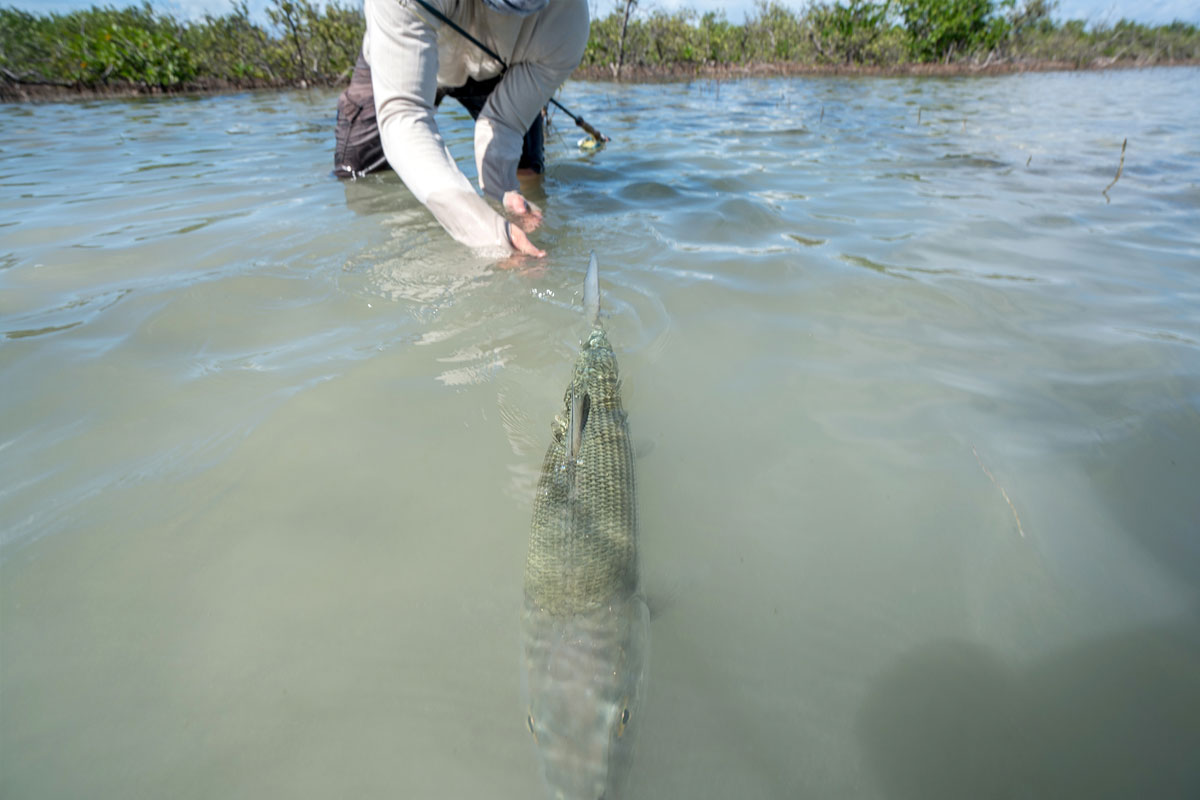 It was a good sized fish – a beast, if you will! Just when I thought the air of “dirtbag” fishing had lifted and this proud fly fisherman would gracefully engage this beautiful catch… I noticed something not-quite-right. The hook wasn’t in the mouth of the fish. It was lodged into the ventral side of its head. I had foul-hooked it. It was the icing on this dirtbag cake. As the bonefish swam safely away from my outstretched hands I braced for the impending mockery. Bring it on! 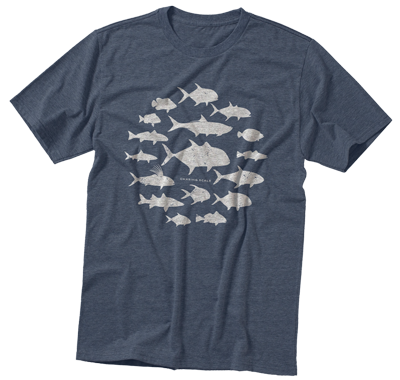 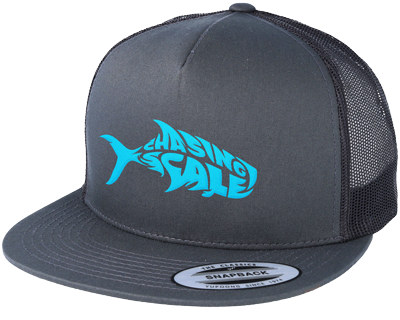 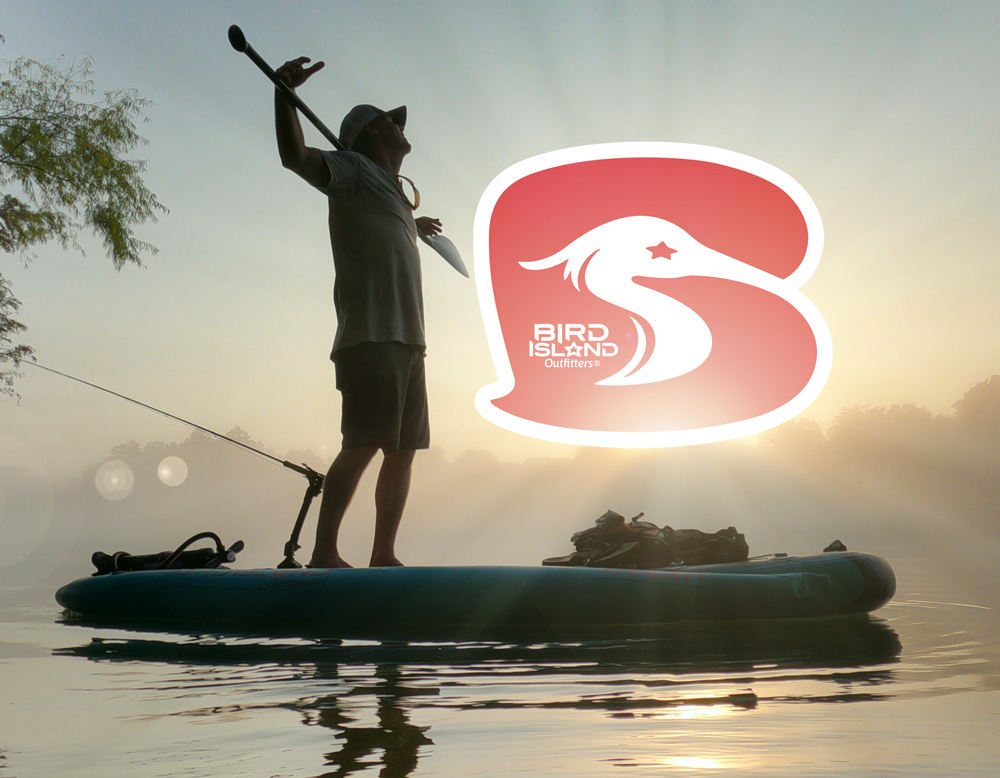 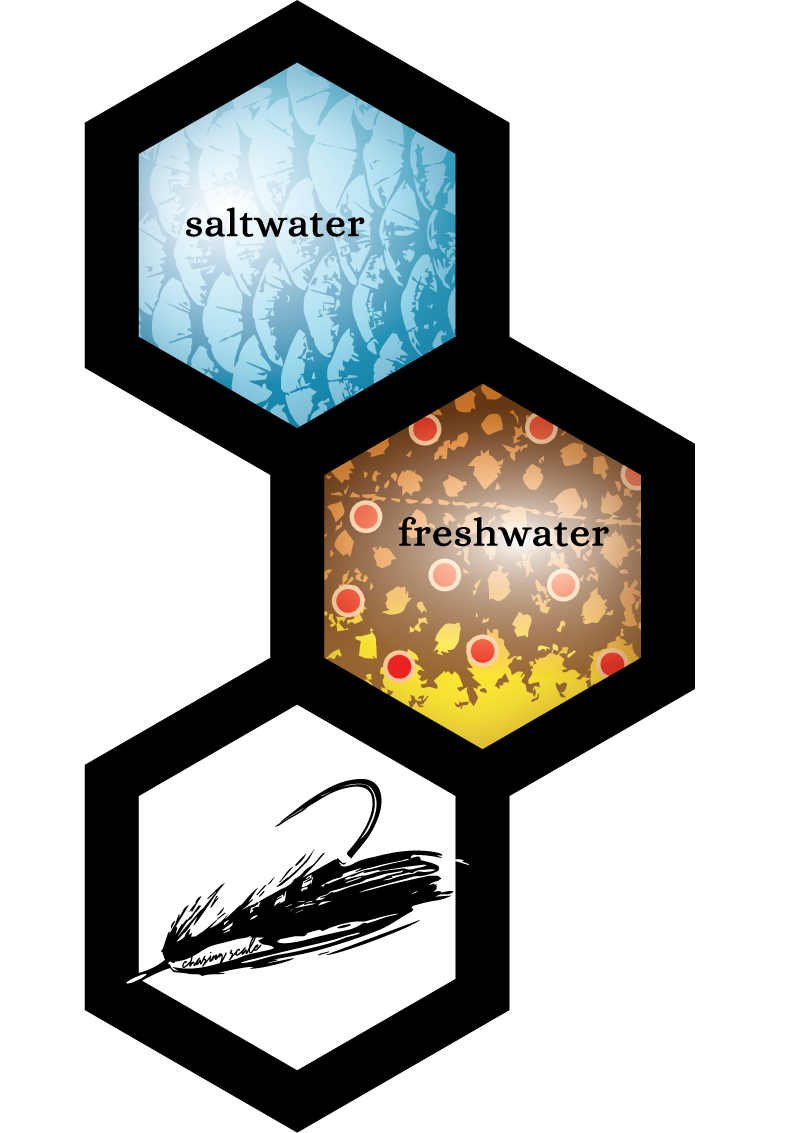