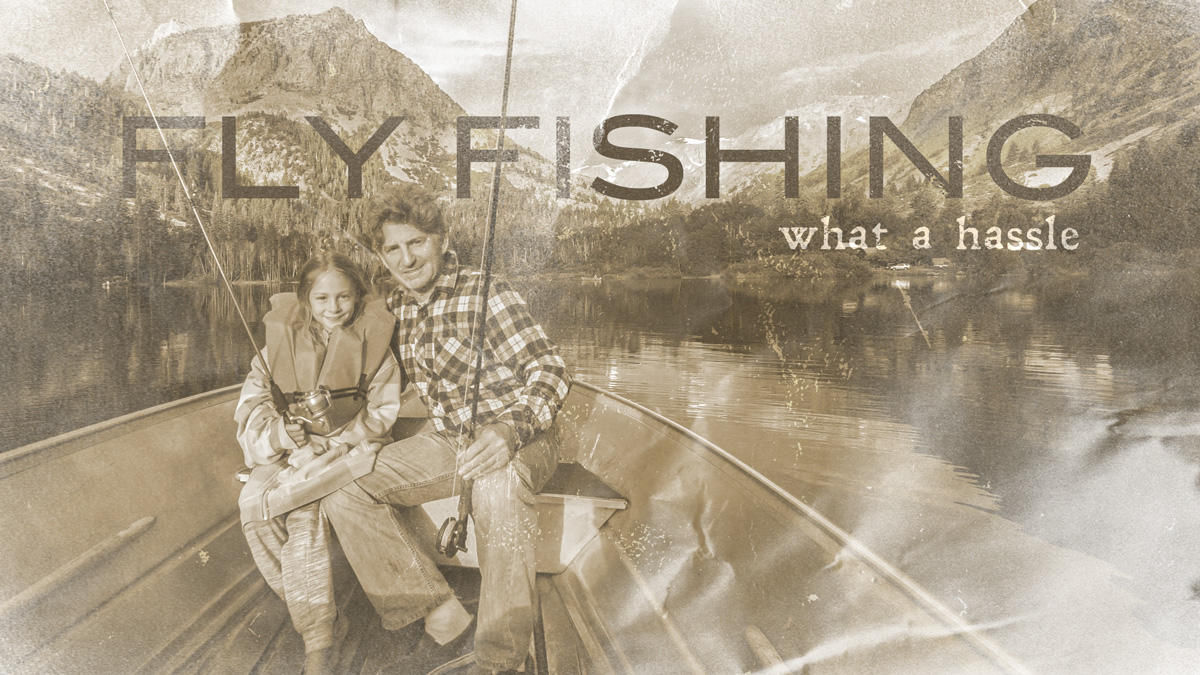 Fly Fishing: What a Hassle.

[To all you fly fishing purists out there: don’t get your knickers in a twist over this headline. The following essay is not an indictment on the sport of fly fishing. Give it a chance. It might just resonate with you. In the very least I’m hoping you’ll get a chuckle or two out of it. I will preface the following story with this: I’ve been a fly fisherman for 25 years. If you’ve been a fly angler for a while, more than likely you’ve experienced a situation akin to the one I am revisiting here.]

The words rang out across the water as clear as day: “Those guys are fly fishing. What a f*cking hassle.” It was a comment sent out into the ethos. It seemed to freeze time on that blissful afternoon. The proverbial scratching of the record stymied my fly casts. On a crisp afternoon where you could hear a pin drop, the gentleman who made the remark couldn’t hide, nor did he try. He was a middle-aged, unfit fella… Coors Light in hand… cigarette precariously balanced below a bushy stache. Maybe he was fluffing his feathers, so to speak—trying to impress his buddy onboard who sat on the bow quietly clutching a spin rod. Who knows? He proceeded to slowly motor his little aluminum boat toward the rising trout that we were actively targeting. What happened next? Well, let’s just say it was memorable enough to write a blog post about. 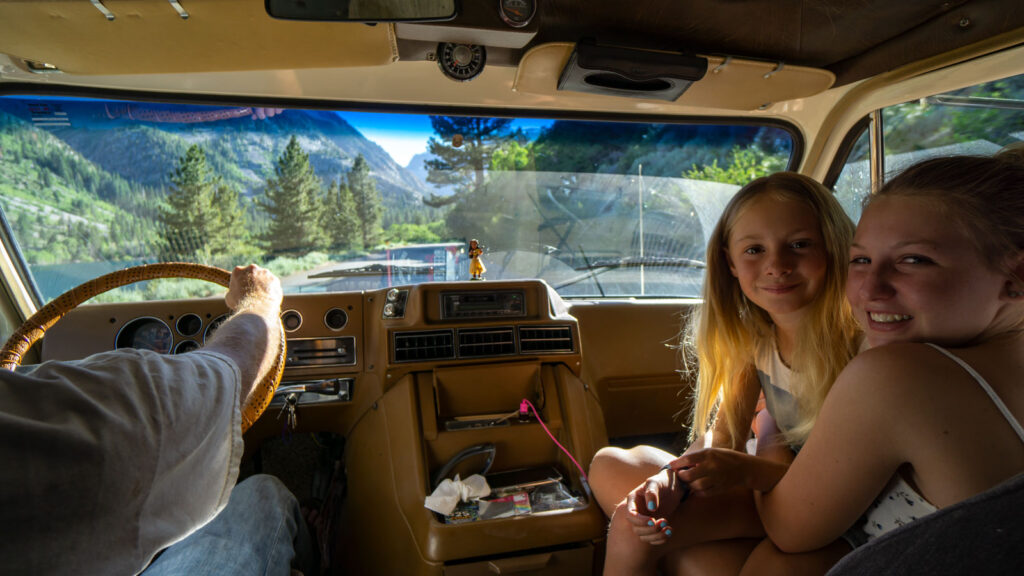 Cruising into the heart of the Sierras.

First, let me set the scene for you.

It was a dreamy, summer afternoon… the slightest of breezes gracing our shoulders with crisp, cool air fresh off the distant peaks. We were on a small, aluminum, rental boat anchored about 50 feet off shore—a sweeter spot I have yet to find in all my days on the water. You could hear the faint babble of a nearby brook feeding its clear, sweet nectar to our cozy, little lake tucked deep within the eastern slopes of the Sierra Nevada Mountains. Power and majesty surrounded our oasis. Our u-shaped, valley home was dominated by gigantic, brilliant granite faces basking in the warm, late-day sun. To think that thousands of years ago the very spot where we were anchored was covered by a mammoth glacier inching and gouging its way down through the valley. Fast forward thousands of years and there we were, doing some fishing and making some memories.

Gigi rigging up the spin rod with a swimming grub lure. 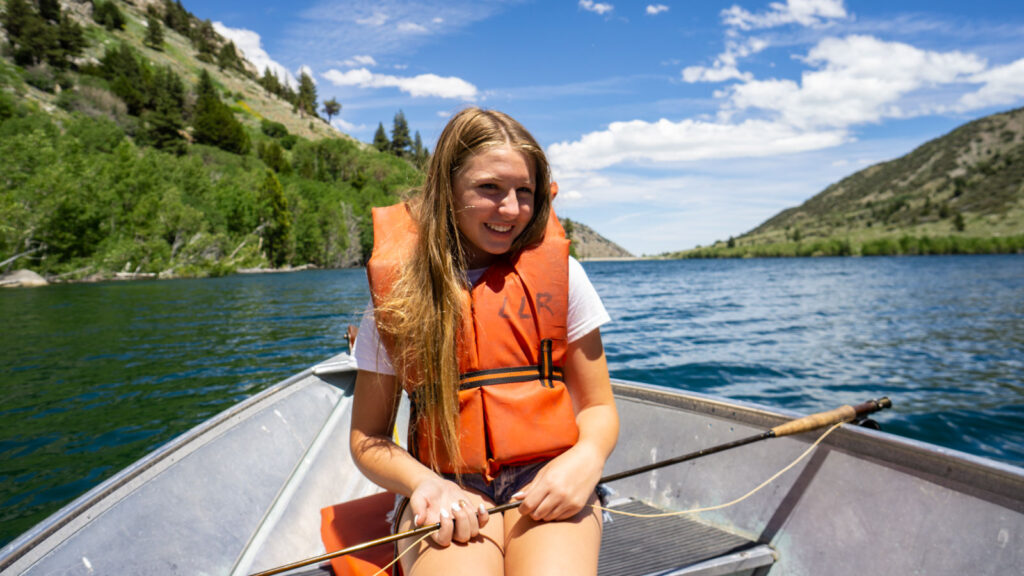 Our boat was one of a handful on the water—abnormal for a holiday destination at the height of summer. I was with my brother-in-law and two youngest nieces, none of whom had ever been fly fishing prior to this family outing. It was the Fourth of July weekend and I was teaching them the “101”. We even caught a few fish! My pre-teen niece Gigi was eager to tie lures and flies onto our various rigs. My teenage niece Lilly regularly made us aware that she’d “rather be shopping”. She was secretly enjoying herself (but would never admit that to us). My brother-in-law Michael was busy learning how to cast one of the fly rods. 3 o-clock, 9 o’clock… 2 o-clock, 8 o’clock. He was putting all his mite into those casts. I was happy to see his determination. To all the fly fishing purists: ear muffs! As an insurance measure, I brought a spin rod. It was a good fishing alternative for Michael or the girls. It’s not like we had all the time in the world to master the “art” of fly fishing. This particular trip was merely an introduction. Our main objective was to have fun. Spin fishing was easy… which equaled, in my mind, a higher probability for instant gratification, ie. catching fish. And catching fish equaled “fun”. Fly fishing can certainly be a bit of a challenge for newcomers to the sport. So, as a standby we rigged up the spin rod with a bobber, worms, eggs, rubber lures—all kinds of fun nicknacks. Let’s just say we were well rounded and ready for anything. We weren’t, however, ready for what was to come next. 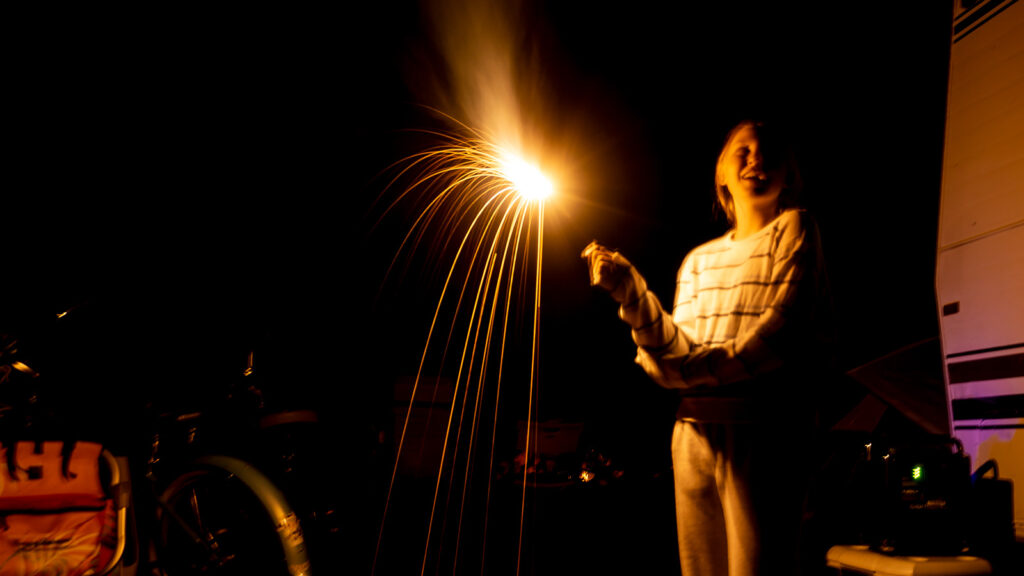 Lilly celebrating the 4th in style. 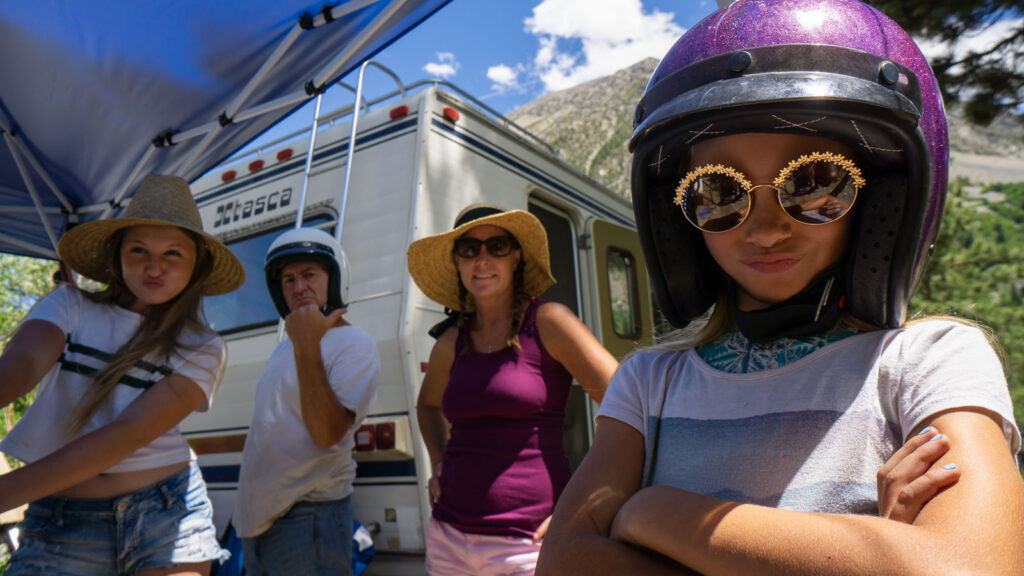 The fam at camp.

“Fly fishing: What a f*cking hassle.”

We nicknamed the guy “Jim”. Oh man! You should’ve been there! In truth, Jim’s “hassle” remark was merely a flesh wound. But then Ole Jim squeezed lemon juice right into that wound and proceeded to break one of the cardinal rules of fishing—he steered his tin can right through the patch of water we were working… and right over my fly line. I’m pretty sure good Ole Gentleman Jim knew exactly what he was doing. I could only muster up a “Really?” as I peered across the water and into his blood shot eyes. With zero remorse, he shrugged his shoulders at us with a spiteful “did I do that?” smirk while slowly motoring by.

In truth, Jim’s “hassle” remark was merely a flesh wound. But then Ole Jim squeezed lemon juice right into that wound and proceeded to break one of the cardinal rules of fishing—he drove his tin can right through the patch of water we were working… and right over my fly line.

It was definitely a moment I hoped the kids would never forget—perhaps not because of the blatant disrespect shown by another human being, but because of the sheer comic absurdity of the interaction.

Now, a lot of people would’ve gotten upset by this rude gesture coming from a fellow lake enthusiast such as Ole Jim—and rightly so. Some might’ve even retaliated with a few choice words of their own directed back to said “enthusiast”. That’s not at all what happened. Our first collective reaction was brief silence and utter disbelief. Our second: unabashed laughter. What was initially thought to be an unfortunate speed bump on our family vacation became a bonding experience. Turns out it became an enormous highlight from the trip. That brief moment on the water spawned a shared inside joke that lasted the remainder of the vacay… and beyond. It became our “mantra” of sorts. The next day, we all went on a hike up the valley. At one point during the hike Michael remarked: “Hiking: what a hassle.” It was hilarious. My favorite was when little Gigi was toasting her s’mores one night over the campfire and smirked: “S’mores: what a hassle!”. Priceless. 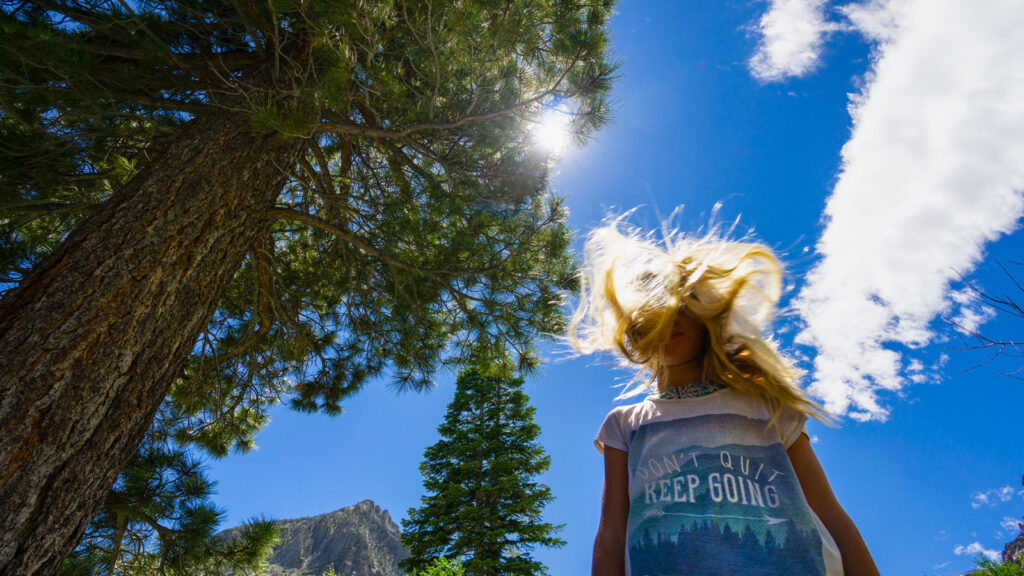 It makes me all warm and fuzzy inside just thinking that Ole Jim is out there somewhere, a heater hanging delicately from under his furry snot mop, a delicious silver bullet in hand, proud captain of his ship, trying to impress his wide-eyed passenger with a hot take on a topic he knows nothing about. Man, I wish the old salt bag knew the joy he brought to our family vacation and the lasting impression he made on our lives.

Join me next time when I attempt to answer the age old question: Is fly fishing, in fact, a hassle?

Brock is the lead writer at Chasing Scale • brockmunson.com